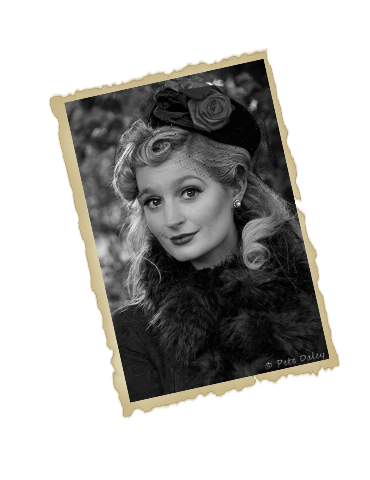 International classically trained Soprano with much versatility who performs a wide range of genres including songs from the Bygone Era, Cabaret and Classical Crossover

‘Lubelle, you are one of the finest vintage artists I have ever seen or heard. I feel like I have stepped right back in time’. David Walliams

She's very pretty, slightly baffled why she didn't go through.' Lord Andrew Lloyd Webber, BBC 1's 'How Do You Solve A Problem Like Maria?' where Lubelle narrowly missed making the finals

...From Rosebud to Full Bloom!

Lubelle won the title BBC Radio 2 Choirgirl of the Year at the age of thirteen and was immediately thrust into the limelight. A succession of solo radio and TV broadcasts followed including the Queen's Prom from the Royal Albert Hall and numerous BBC Songs of Praise recordings. This led to her making two albums of choral music for BBC Enterprises.

Lord Andrew Lloyd Webber personally invited Lubelle as his ‘chosen one’ to take part in the finals of BBC 1’s ‘How Do You Solve A Problem Like Maria?’ where she appeared with His Lordship and Graham Norton.....(Scroll down for more!)

Over the years her numerous solo television performances have been shown worldwide on the BBC, ITV and SkySports alongside her regular radio broadcasts.

Guest soloist appearances at major UK venues include the Royal Albert Hall and Royal Festival Hall London,Symphony Hall Birmingham and Bridgewater Hall Manchester with West End performances at the Dominion Theatre and the Bloomsbury Ballroom. Lubelle was guest artist on a national tour of UK cathedrals and on major UK arena tours. She has been privileged to work with the BBC Concert Orchestra, Opera North Orchestra, Her Majesty’s Royal Marines Band and the Royal Choral Society.

On completing her Diploma in Performing Arts, Lubelle accepted an unconditional offer to study an Honours Degree in Vocal and Opera Studies at the Royal Northern College of Music UK. She was given the opportunity to further her studies at the Chicago College of Performing Arts, but instead chose the Sydney Conservatoire, fulfilling her dream to perform as soloist at the Sydney Opera House....(Scroll to finish!)

Whist in Sydney Lubelle was a regular guest artist at the finest jazz venues, major festivals and performed live on ABC television. She later made her debut appearance in Singapore with a run of shows critically acclaimed by press and media. Lubelle worked with London Cabaret performing in their West End 1920s production and took her own vintage cabaret show to Bali, Indonesia. She has taken her one woman shows across Alaska, South East Asia and Europe with the six star boutique cruise line SilverSea.

Performing on a variety of stages has become a way of life for Lubelle - from the formal through to the informal - and when possible to the totally alfresco - bringing the music she loves to audiences all around the world.

Scroll Down For More